For a long time I have been a user of your hardware. There is one reason for this; they are low cost for the specifications that you get. Being cheap, one may be entailed to accept flaws, but when they are in core system, I personally cannot. Having owned several of your laptops, I cannot understand why it is that your designs still include (in your laptops) air intakes underneath the chassis. On both my present Studio 1536 and my old Inspirion 1150, I have experienced minor issues, such as a loud fan through to major issues such as system spontaneous system shutdown, later noted as caused by the CPU overheating. Both these issues are caused by one simple problem: the air intake depositing fine (and coarse) particles of dust, which have been sucked up by the downward facing fan, on to the heat sink. Not only does dust get all over the heat sink but all through the fans case possibly reducing the effectiveness of the fan. This problem can be resolved by a person such as myself by removing the back of the computer and then the casing for the fan and cleaning the dust from the heat sink, but I must state that this is highly impractical and unlikely to occur to the vast number of users of your laptops. Surely then it is your obligation to those customers to improve the technology to alleviate the problem or at least simplify the process of cleaning.

There are several possibilities to resolve this issue yet none have been implemented in the long period of time I have been a customer. The first of which I can think is that the air intake could be placed in a position other than on the underside of the computer chassis. This is done on various cheap brands of computer one that I will note is my HP Mini netbook that gets its air from the right and passing it out the left hand side. Clearly, this is an option that may require major redesign but seeing as it is possibly on $400 netbooks then I must state it could be done without too much expense on larger laptops. The second is the use of a filter that is simple to remove and clean. This would allow those who have read the basic instruction manual to alleviate the problem easily. However, removing the need for consumers to service the product would be beneficial, by means of reducing requirements on them and on your support staff:  as such, the first proposal really should be the one undertaken. Your third choice and one that require very little effort is to include in your manuals details of how to clean the heat sink and a notice of what symptoms the computer may experience due to overheating. This option however shows that your designs are flawed and would require more effort from the consumer and thus more customer support on your part and so is the least preferable proposal I have.

So, I have provided you with my opinion regarding a design flaw in your notebook systems and now it is up to you to correct it. I hope my advice has been of some worth. 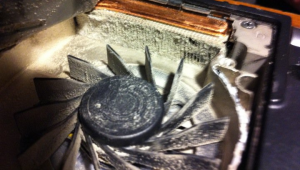 An image of my Dell Studio's dust clogged fan and heat sink.